Shining a light to spur action on nutrition

Malnutrition is a universal issue holding back development with unacceptable human consequences. Yet the opportunity to end malnutrition has never been greater. The UN Decade of Action on Nutrition 2016–2025 and the Sustainable Development Goals (SDGs) provide global and national impetus to address malnutrition and expedite progress.

The burden of malnutrition across the world remains unacceptably high, and progress unacceptably slow. Malnutrition is responsible for more ill health than any other cause. Children under five years of age face multiple burdens: 150.8 million are stunted, 50.5 million are wasted and 38.3 million are overweight. Meanwhile 20 million babies are born of low birth weight each year. Overweight and obesity among adults are at record levels with 38.9% of adults overweight or obese, stretching from Africa to North America, and increasing among adolescents. Women have a higher burden than men when it comes to certain forms of malnutrition: one third of all women of reproductive age have anaemia and women have a higher prevalence of obesity than men. Millions of women are still underweight.

Yet significant steps are being made to address malnutrition. Globally, stunting among children has declined and there has been a slight decrease in underweight women. Many countries are set to achieve at least one of the targets set by the global community to track progress on nutritional status to 2025. The level of knowledge on what it takes to deliver results has never been greater. The global community and national stakeholders have never been better placed to deliver results, with more governance, policies, actions, plans and targets. Advances in data are enabling us to progress our understanding of the nature of the burden of malnutrition in all its forms and its causes – and therefore guide and inspire action and improve our ability to track progress.

Through this analysis, the 2018 Global Nutrition Report casts a light on where there has been progress and identifies where major problems still lie – and thus where actions are needed to consolidate progress and fill major gaps.

There has been some progress in reducing malnutrition, but it has been too slow and not spread across all forms of malnutrition 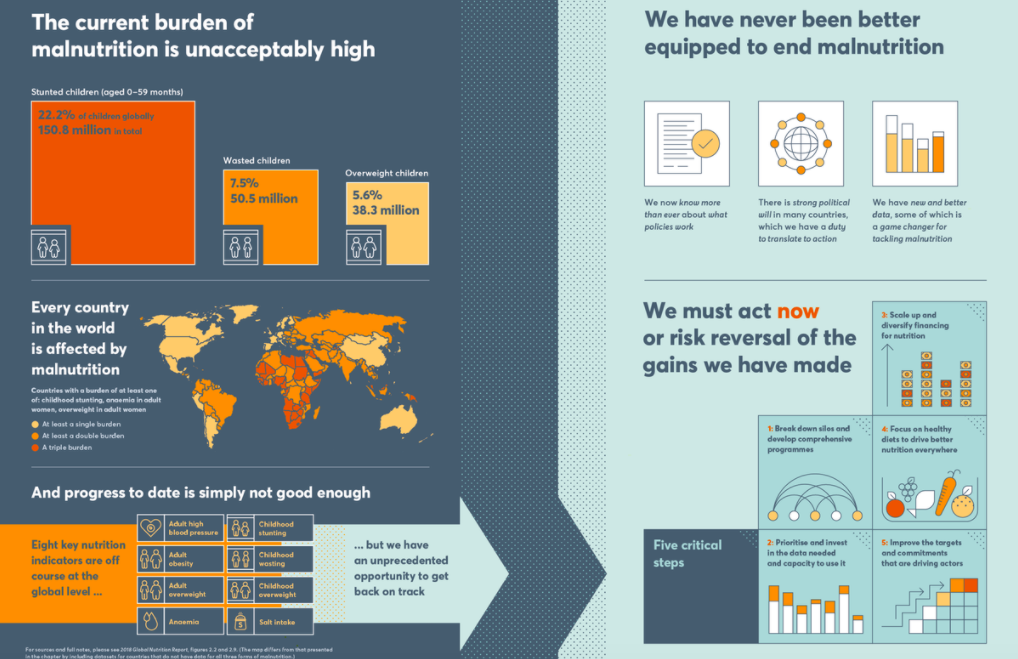 Now steps have been made in addressing and understanding malnutrition in all its forms, the uncomfortable question is not so much why are things so bad, but why are things not better when we know so much more than before? The findings of the 2018 Global Nutrition Report indicate that meeting the 2030 target of ending malnutrition in all its forms will require five critical steps in the way we think and act. These are not new ideas but common sense based on the evidence presented, and worth repeating year after year as the data continues to show just how important they are if we are to truly make things better.

1. Break down silos between malnutrition in all its forms

The data shows that different forms of malnutrition coexist but are being tackled at different rates, vary between populations, and overlap with each other in various ways. Therefore they require integrated approaches and cohesive work to address them. Different communities – the humanitarian, obesity, NCD and micronutrient communities for example – must work together to ensure the different burdens are tackled efficiently and effectively. Tackling one form of malnutrition should be an opportunity for tackling another: governments, the humanitarian community and the nutrition community should assess if existing actions targeted at one form of malnutrition could be extended or redesigned to address other relevant forms. For example, intervening in undernutrition in early life to address obesity and NCDs in later life. Pooling often-scarce resources, varied expertise and innovative, and diverse tools and approaches could be transformative in ensuring nutrition actions work ‘double duty’ for different forms of malnutrition.

2. Prioritise and invest in the data needed and capacity to use it

Designing actions that result in impact is impossible without adequate knowledge of who is affected by malnutrition and why. The progress made in recent years in gathering, collating and analysing data presented in the 2018 Global Nutrition Report shows how investing in data can help inform the nutrition response. Governments, international organisations, research organisations and academic institutions must continue this ongoing data revolution in nutrition. Geospatial data on who is affected by what form of malnutrition, where and why offers promise to support all decision-makers in designing actions for impact. Data on nutritionally vulnerable populations – such as people in poverty, women, adolescent girls, young children and people who are marginalised and geographically isolated – is vital. The efforts made to improve the collection and analysis of diet data must continue, and the shocking gap in micronutrient data filled as a matter of urgency. But data collection and analysis is not enough: all stakeholders need the capacity to use it to make evidence-based decisions. The data community must make the data easy to interpret by policymakers, businesses and NGOs who are making decisions about what to invest in, and where to intervene.

3. Scale up financing for nutrition – diversify and innovate to build on past progress

Every year the Global Nutrition Report calls for more financing for nutrition: ultimately, without adequate and appropriate funds invested towards all forms of malnutrition, we cannot make progress. The data in this year’s report shows patchy progress. Building on this progress, domestic investments must continue to grow and international aid donors must keep investing through ODA. The use of the new policy markers and the improved DAC Creditor Reporting System (CRS) code should be taken up so funding streams are transparent and traceable. Funding needs to be focused on ensuring nutrition plans are delivered in practice. Yet different and innovative forms of financing will also be needed to make progress. Those who control resource flows – governments, multilateral organisations, philanthropic foundations and wealthy investors – need to find innovative ways to finance nutrition action and provide the institutional and human capacity necessary to do so.

4. Galvanise action on healthy diets – engage across countries to address this universal problem

The data presented in the 2018 Global Nutrition Report shows that poor quality diets among infants, young children, adolescents and adults is unacceptable. Suboptimal diets are a major risk factor of malnutrition, disease, disability and death globally. And they are a problem everywhere: no country or population group is immune. Governments and business need to implement a holistic package of actions to ensure food systems and food environments are delivering healthy diets that are affordable, accessible and desirable for all. The lead taken by communities, cities and city networks must be scaled up. Lessons must be learned from successes everywhere and barriers broken down.

5. Make and deliver better commitments to end malnutrition in all its forms – an ambitious, transformative approach will be required to meet global nutrition targets

Only SMART commitments designed for impact that signatories consistently report on and deliver will be fit for purpose to end malnutrition in all its forms. The N4G 2020 summit in Tokyo, Japan offers an opportunity to respond to the challenges and opportunities presented by the data in this year’s report and for the global community – donors, national governments and business – to renew commitments, hold ourselves accountable, and expedite the critical steps needed to end malnutrition in all its forms.

📣 Calling all #youth in the #AsiaPacific Region and beyond! Our friends at Youth Co:Lab are hosting the hybrid #YouthCoLab Summit 2022 this summer July 4-7, 2022 🤩 This year's Summit aims to highlight, encourage and celebrate the role of young people in the #DecadeofAction, while showcasing and...
Contributor:
clebowitz
59 Likes
1 Comment
Adolescents