In many low- and middle-income countries, deficiencies in the quality of paediatric care at district hospitals are a major factor limiting reductions in child mortality. In 2012, the Russian Federation funded a US$ 3.7 million three-year tripartite initiative with the World Health Organization (WHO) and the governments of Angola, Ethiopia, Kyrgyzstan and Tajikistan to address this lacuna and accelerate progress in reducing child mortality. The initiative aimed to:

The process was initiated through national orientation workshops in all four countries. Based on the WHO Pocket Book of hospital care for children, each country subsequently developed or updated national treatment guidelines and national standards for quality of care. The countries carried out assessments against these standards in the participating pilot hospitals as well as in some non-pilot hospitals. Based on the results, the countries identified areas for improvement and conducted a total of 60 training courses covering nearly 1500 health workers in pilot hospitals. All participating hospitals introduced emergency triage and treatment systems and job aids. Countries developed or updated materials and tools and staff received supportive supervision. The countries also received equipment, principally for emergency care, such as resuscitation equipment, oxygen concentrators, training manikins, intravenous supplies and basic biochemistry laboratory equipment. The results of reassessments in 2014 and 2015 showed consistent improvement in the quality of care in the majority of the participating hospitals as well as a trend of declining child mortality rates. Specifically, they showed an improvement in clinical case management of severe diarrhoea, of pneumonia and of conditions with fever, in addition to care for newborns. The frequency of unnecessary hospitalizations and unjustified and painful paediatric procedures were reduced in Kyrgyzstan and Tajikistan. The assessments also showed that in most participating hospitals, hospital stays were shortened. There was also a more rational use of medicines with a significant reduction in polypharmacy and unnecessary infusions and injections, saving significant hospital resources. Overall, as a result of the project, children are receiving better care and hospitals are better organized.

The WHO framework for improving quality of care, with its comprehensive implementation model, provided a process through which the countries could build national capacity and establish consistent and effective collaboration among stakeholders. The initiative also fostered strong working relationships between staff in the national ministries of health and experts from the Russian Federation and WHO.

The initiative catalysed the introduction of the concept of quality improvement (QI) and increased national and partner investments in QI processes. The expansion of the project model to a national or regional scale is essential to ensure high coverage of quality child health interventions and to improve child health outcomes. Countries are now looking to develop and implement long-term plans and budgets for effective scale-up. Implementation presented a number of challenges. In general, all countries experienced delays in the purchase and distribution of equipment as well as the establishment of centres of excellence, and only Kyrgyzstan had sufficient resources to conduct project evaluation studies. In Angola, only half of the activities planned by the 11 hospital teams were implemented, due to lack of human resources, limited implementation capacity and changes in hospital management during the course of the project. 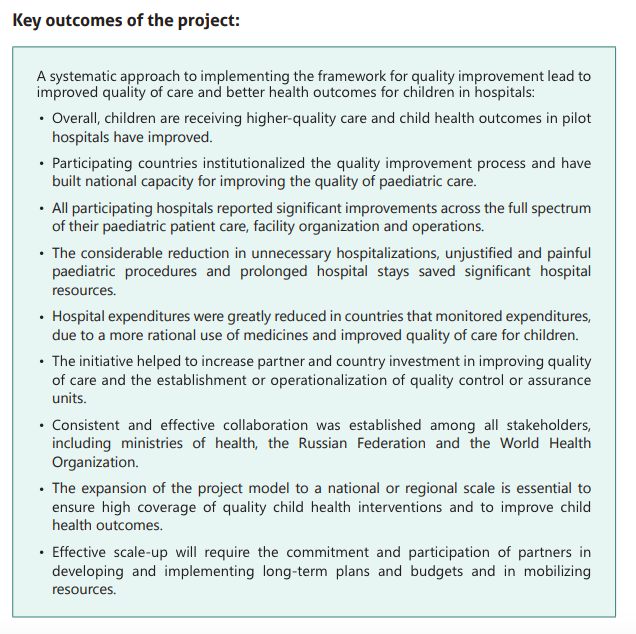