#BOURE2020 Webinar Series: Ending institutionalization and strengthening family and community based care for children in Europe and beyond

Presenting the Evaluation of the Family for Every Child Project in the Region of Shumen, Bulgaria and reflecting on impact and lessons learned from the child care reform in Bulgaria and the transition from institutional care to community-based services in Europe and beyond.

Has deinstitutionalization improved the situation of children in Bulgaria? 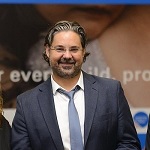 Aaron Greenberg joined the UNICEF Regional Office for Europe and Central Asia as Senior Child Protection Regional Advisor in July 2017. Prior to this, Aaron served for nearly a decade as chief of child protection in Georgia and then in Myanmar where he directed UNICEF’s support to government and NGO partners around social welfare, child care and justice reforms. He has experience in complex emergency contexts in both Eritrea and Sierra Leone. Aaron has also worked in the Strategic Planning Unit of the United Nations Office of the Secretary General; at Columbia University's Center for International Organization and Security; and for local government in his hometown of New York City in the US. He has an M.A. in International Affairs from Columbia’s School of International and Public Administration, and a B.A. in English Literature from Union College. 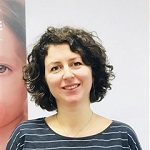 Elena Atanassova joined UNICEF Bulgaria in 2010 as a Monitoring and Evaluation officer. In 2013 she took the position of a Child Rights Monitoring Specialists supporting monitoring and evaluation in the CO and focusing on  independent child rights monitoring, promotion and monitoring of child rights in Bulgaria. Prior to  working for UNICEF she has gained experience in  EU research related to social cohesion,  ECD and family support,  and has also  worked  for the  CoE. In Bulgaria, Elena has worked at the  State Agency for Child Protection to the Bulgarian Council of Ministers as well as in the Embassy of the Netherlands in Sofia, where she was managing the MATRA funded projects in the area of human rights and social policy. Elena has graduated in Law from Sofia University and holds an LL.M. from Columbia University in New York, USA.

Zornitsa Roussinova is elected President of Economic and Social Council of Republic of Bulgaria form the National Assembly.  Zornitsa Roussinova was appointed Minister of Labour and Social Policy from May 2016 to January 2017, Deputy Minister of Labour and Social Policy during March 2012 - March 2013 and November 2014 - January 2016, with overall responsibility of labour market and social inclusion, international relations, incomes and demographic policies. She has ample experience in program and project management acquired in her career with UNDP, USAID and the Bulgarian-Swiss Cooperation Program.

Zornitsa Roussinova has played a key role for the reform of childcare system in Bulgaria. Through her personal commitment, political responsibility and expertise, the closing of institutions for children and the path for change of the care system has become fact.

Dani Koleva joined UNICEF Bulgaria as a Child Protection Specialist in Oct 2018. Prior to that, she worked as a Policy Director of the National Network for Children in Bulgaria, an umbrella organization, which unites more than 140 NGOs committed to children’s rights and supporting children and parents across the country. Dani has also worked as a Programme Director for ARK, EveryChild and the European Children’s Trust (ECT) programmes in-country and a Programme Officer for Central and South Eastern Europe for ECT in London. She holds a master’s degree in public policy management and has more than 22 years’ experience in the field of child protection and development of preventative and alternative services, deinstitutionalization, advocacy and monitoring and evaluation. In 2014, Dani was awarded together with 24 other children’s rights advocates by the President of Republic of Bulgaria with Honored Mark for exclusive contribution and merits for protecting children’s rights in Bulgaria.

Stela Grigoras is with the UNICEF Regional office since March 2018, supporting UNICEF country offices and the governments in the Europe and Central Asia to implement effective child care/social services reforms. Currently she coordinates the implementation of the European Commission’s Phase III of the EU Child Guarantee Programme in a number of EU member states.

In the period of 2016-2017, Stela Grigoras worked as the Minister of Labour, Social Protection and Family (later the Minister of Health, Labour and Social Protection), leading the implementation of important reforms in child protection, child care, social protection, employment and health care. Between 1998 and 2016 she worked for the EveryChild, UK, designing and implementing large-scale reform projects in child care, child protection, children care, social protection in Moldova and beyond. Stela Grigoras is a medical doctor by profession, holds a PhD degree in sociology, and has undergone a number of international qualifications, including in social work. She speaks Romanian, Russian, and English. 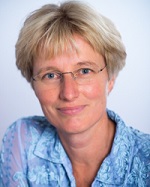 Marian Bakermans-Kranenburg is a Professor of Child & Family studies at the Vrije Universiteit, Amsterdam, the Netherlands. Her research focus is attachment and emotion regulation in children and their caregivers, with a special emphasis on neurobiological processes in parenting and development. Her academic interests include the interplay between nature and nurture, hormonal correlates of parenting, and interventions. She has been involved in a series of studies on institutionalized children, as well on foster care and adoption, and is one of the lead authors of two papers on institutionalization and de-institutionalization, commissioned by The Lancet. She is a fellow of the Association for Psychological Science and an elected member of the Royal Netherlands Academy of Arts and Sciences. 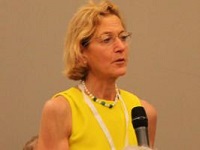 Maria-Anna Paraskevas has served in the European Commission since 1981, and has a European vision. She has been glad to play an active role in the development of policies such as reconciliation between work and private life, the fight against child poverty, active inclusion, de-institutionalisation and migration. She is now keen to push even further the strand on active inclusion, the second thematic objective of the ESF. This policy, launched in 2008, is based on the principle that every citizen should have a minimum income, access to quality services and access to the labour market. “Everybody should have some kind of job, whatever it is, because you need a job not just for the money but also for social interaction and in order to be able to integrate into society.” 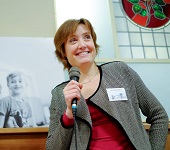 Jana Hainsworth is Secretary General of Eurochild a European network of organisations promoting the rights and well-being of children and young people in Europe. She oversees the development of the network, which now counts almost 200 members covering 35 European countries. In 2008 Eurochild established its thematic working group on children in alternative care. Over 50 members are active in this group which facilitates exchange of policy and practice on children in care or at risk of entering the care system.  Eurochild co-led the Opening Doors for Europe’s Children campaign for 5 years and has led many activities aimed at ending institutional care for children and strengthening families.

Eurochild currently co-chairs the European Expert Group on the transition from institutional to community based care, together with the European Disability Forum.  The EEG is a broad coalition gathering stakeholders representing people with care or support needs including children, people with disabilities, people experiencing mental health problems, families, people experiencing homelessness; as well as service providers, public authorities and intergovernmental organisations.

Jana previously worked in a Brussels-based communications consultancy where she was project manager for a communications contract under the EU’s Community Action Programme to combat discrimination. Jana also managed a network of organisations promoting long-term voluntary service in the youth field and has worked for several years in a research and consultancy firm on different technical assistance contracts for the European Commission.  She has a Masters degree in environment, development and policy from Sussex University and an Honours degree in Natural Sciences from Durham University in the UK.

The impact of institutionalization for children’s development and the whole society has been well documented. Decades of research have demonstrated that we cannot truly support children without investing in family relationships and building trust with a responsible adult which are some of the most important ingredients for quality care provision to all children. [2]  The financial and social cost for the whole society is not to be underestimated. Investment in family-based care and community-based services, as well as mainstream services, not only improves the quality of life of those who use them, but also helps create more and better jobs in the social, educational and health sectors, and in so-doing contributes also to achieving  objectives related to social inclusion, education and employment.[3]

In the recent decade, Bulgaria achieved an impressive progress in the child care system reform and has important experience and lessons learned to share with other countries. The deinstitutionalization reform started back in 2000 with the adoption of the Child Protection Act. At the time there were only few day care centres as alternative services to children and parents and more than 30 000 children were placed in residential care. The first years of the reforms were focused upon development of services and capacity of the system until 2010 when the National Strategy Vision for Deinstitutionalization of children was adopted which put a focus on closure of institutions and committed to close all of them by 2025.

As a result, all large-scale institutions for children with disabilities from the old type have been closed, there’s significant increase in alternative to institutions services such as foster care and preventative and other social services such as community support centres, mother and baby units, centres for social rehabilitation and integration, etc. being developed. With the new Social services act, adopted in March 2019 and enforced from 1st July 2020, the Government has reconfirmed its political will to close all the remaining infant homes by 01.01.2022.

[2] Berens, A., Nelson, C., The science of early adversity: is there a role for large institutions in the care of vulnerable children?, The Lancet, 2015

[3] Toolkit on the Use of European Union Funds for the Transition from Institutional to Community-based Care, Toolkit-Revised US-October-2014.indd (wordpress.com)

Deinstitutionalization and development of a continuum of services has been at the heart of several UNICEF programmes for Bulgaria with the aim to strengthen policies development and their effective implementation and monitoring, allocation of funds, inter-sectoral and institutional coordination and develop capacities at national, regional and local level to better plan and deliver services to children and families.  In the period 2010 – 2016 UNICEF supported the implementation of the demonstration project “Family for Every Child” in partnership with key national stakeholders (Ministry of Health, Ministry of Labour and Social Policy, State Agency for Child Protection, Agency for Social Assistance) and local authorities (District Governor and municipal administrations). The purpose of the evaluation was to assess the approach, results, resources and impact of the project in relation to achievement of the project objectives, and impact on child welfare in the region and on the national policies. The knowledge generated was used by the Government and UNICEF to inform the work for ensuring sustainability and scaling up to next phase of deinstitutionalization reform.

📣 Calling all #youth in the #AsiaPacific Region and beyond! Our friends at Youth Co:Lab are hosting the hybrid #YouthCoLab Summit 2022 this summer July 4-7, 2022 🤩 This year's Summit aims to highlight, encourage and celebrate the role of young people in the #DecadeofAction, while showcasing and...
Contributor:
clebowitz
59 Likes
1 Comment
Adolescents