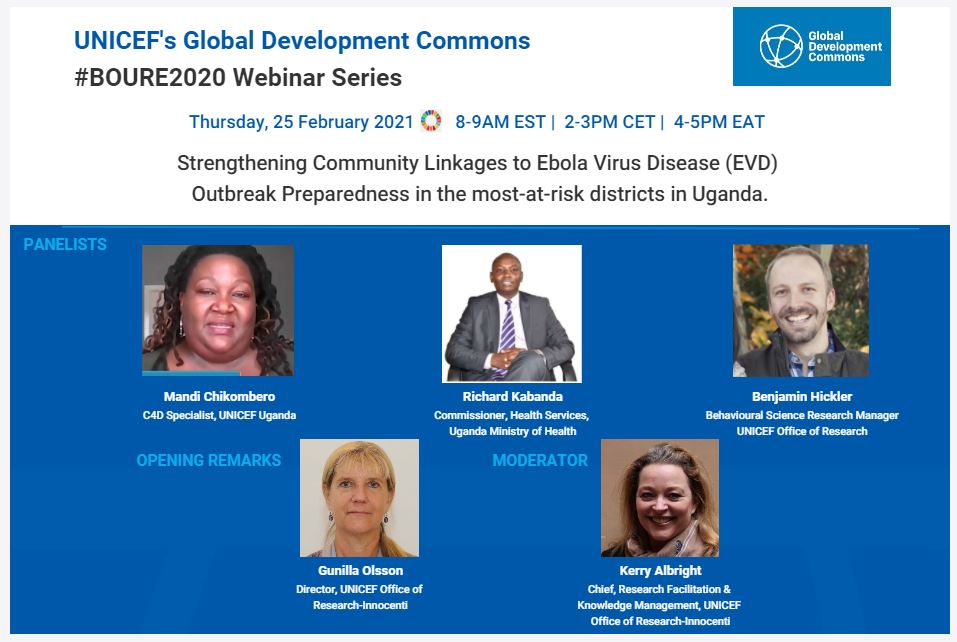 In June 2019, an Ebola epidemic was declared in Kasese District, southwestern Uganda. This was traced, in part, to the porous border between Uganda and the Democratic Republic of the Congo, where an epidemic had been ongoing since August 2018.

At the onset of the outbreak, the Ugandan National Task Force on Disease Outbreaks and Response called for a strategy for border health, cross-border cooperation and scaled-up risk communication, grounded in an understanding of the sociocultural context prevailing in high-risk border areas.

This research aimed to investigate community dynamics and cultural factors that may affect health-seeking and preventive behaviours by identifying possible areas of cultural resistance to information, and by assessing the appropriateness and acceptability of Ebola prevention and control activities.

Visit the UNICEF Innocenti microsite for the #BOURE2020.

COVID-19 drug and vaccine patents are putting profit before people

#BOURE2020 Webinar Series: The Impact of the Birth Registration Programme in Nigeria: Evidence, Practice and Innovations

COVID-19 drug and vaccine patents are putting profit before people…

Since the birth of the World Trade Organization (WTO) in 1995, most member states have had to abide by the Agreement on Trade Related Intellectual Property Rights (TRIPS), which protects patents and copyrights including those applicable to new diagnostics, vaccines, medicines and medical supplies...
Contributor:
clebowitz
2 Likes
0 Comments
COVID-19+1 more topic

#BOURE2020 Webinar Series: The Impact of the Birth Registration Programme in …

How can UNICEF provide more effective and equitable coverage in complex humanitarian emergencies? UNICEF is a key provider of humanitarian assistance globally, with impressive coverage in some of the world’s most challenging locations. This evaluation assesses the organization’s performance in...
Contributor:
clebowitz
3 Likes
0 Comments