Global Estimate of Children in Monetary Poverty : An Update

This note builds on previous collaboration between the World Bank Group and UNICEF to estimate the global extent of child poverty. We estimate that in 2017, 17.5 percent of children in the world (or 356 million) younger than 18 years lived on less than 1.90 Dollars PPP per day, as opposed to 7.9 percent of adults ages 18 and above. The poverty rate of children at the 3.20 Dollars and 5.50 Dollars lines were 41.5 and 66.7 percent, respectively. The number of children living in extreme poverty declined by approximately 29 million between 2013 and 2017. In 2017, Sub-Saharan Africa accounted for two thirds of extremely poor children, and South Asia another 18 percent. These estimates are based on the Global Monitoring Database (GMD) of household surveys compiled in Spring 2020 and consists of surveys from 149 countries that are also used for the official World Bank poverty estimates. Because the estimates pertain to 2017, they do not consider the adverse economic impact of the COVID-19 (coronavirus) pandemic. 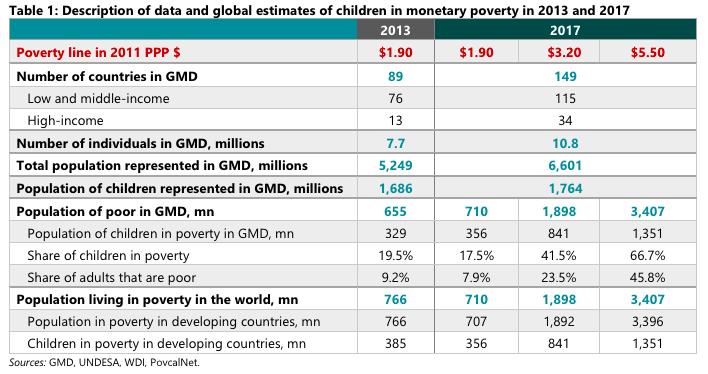 Programme Evaluation: Protecting Children On The Move in the Horn of Africa

Honoring Our Public Health Heroes Who Protect Us All

Please join us for the global launch of UNICEF’s Programming Guidance for Parenting of Adolescents, which aims to strengthen evidence-based programming for parenting of adolescents. Building on parents’ strengths and equipping them to provide support to their adolescent children can have a profound...
Contributor:
Marcy Levy
0 Likes
0 Comments
Play Icon
COVID-19+1 more topic

Honoring Our Public Health Heroes Who Protect Us All…

HONORING OUR PUBLIC HEALTH HEROES WHO PROTECT US ALL A hero is every public health professional in communities across America working to protect us from COVID-19 and other health threats. They are public health department and Centers for Disease Control and Prevention professionals who are working...
Contributor:
clebowitz
1 Like
0 Comments
Play Icon
COVID-19