Annual report produced by US Office of Foreign Disaster Assistance’s (OFDA) professional team of more than 400 staff, including senior managers, experienced disaster responders, and technical experts. Work discusses the implementation of OFDA’s mandate at headquarters in Washington, D.C., and in regional and country offices, Combatant Commands, and coordination hubs strategically located around the world. 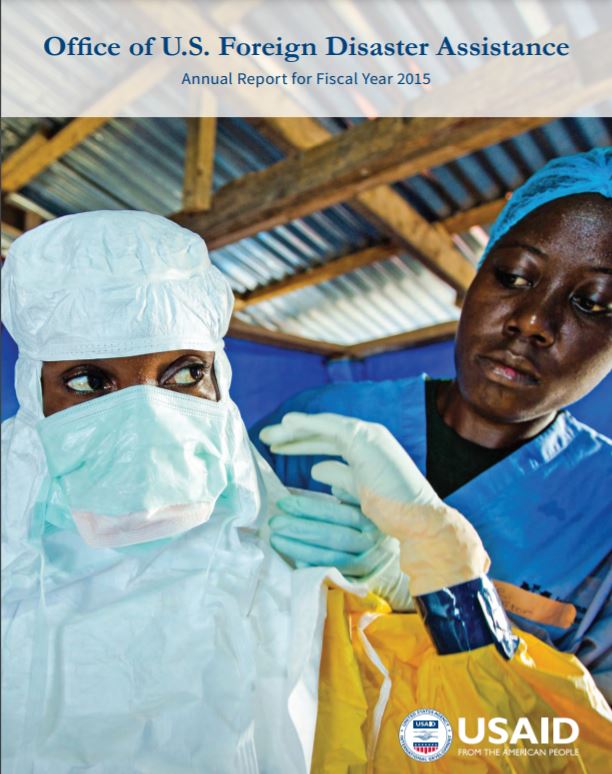 Message from the OFDA Director

FY 2015 was a tremendous year. OFDA had DARTs responding to five major crises simultaneously—a record number—including the Ebola outbreak in West Africa, a massive magnitude 7.8 earthquake in Nepal, and large-scale complex crises in Iraq, South Sudan, and Syria. At the same time, new challenges emerged during the year. OFDA ramped up efforts to deliver humanitarian assistance in Yemen as violence escalated; we also sprang into action when floods hit southern Africa and a tropical cyclone struck islands in the Pacific. At the beginning of 2015, the UN estimated that nearly 78 million people would require humanitarian assistance. In just over a decade, the number of people in need of humanitarian aid has more than doubled. Around the world, violence and insecurity are causing massive internal and cross-border displacement, and aid workers are saving lives at great risk to their own

OFDA seeks to ensure excellence in our own operations and programs, and we will continue to push for significant changes to establish a humanitarian system that is more nimble, effective, and accountable.

For teenage girls, having access to period products is essential. Without them, they can miss school, be embarrassed and humiliated, and even get health problems. Unfortunately, many girls around the world face what is known as "period poverty." This means they cannot afford to buy period products...
Contributor:
Olivia Miller
62 Likes
0 Comments