This policy brief summarizes key findings and recommendations relating to nutrition from the report ‘Child Poverty in the Arab States’. The report examined multidimensional child poverty in 11 Arab States: Algeria, Comoros, Egypt, Iraq, Jordan, Mauritania, Morocco, Palestine, Sudan, Tunisia and Yemen. The report points strongly towards nutrition deprivation as a key issue in the region and documents the double burden of under-nutrition and obesity. It also shows limited correlation between nutritional status and most background variables. Malnutrition seems to affect all countries and all sub-categories of children within these countries in one form or another.

In all of the 11 countries examined, the under 18 population represents a large share of the total country population, from 27.7 per cent in Tunisia to 47.4 per cent in Iraq. The current nutritional status of this large share of children in the overall population will therefore have a considerable effect not only on these children themselves, but on the future prosperity of the region. This provides a strong justification to pay close attention to the evidence on nutrition deprivation emerging from the analysis.

The report on ‘Child Poverty in the Arab States’ used a cross-country MODA (CC-MODA) methodology, adapted to the Arab States, to analyse and compare the 11 selected countries. The report’s analysis was based on comparable survey data sets across the 11 countries. It looked at five dimensions of child well-being, selected in line with the Convention on the Rights of the Child for each of two age categories (0-4 and 5-17). For children 0-4, the dimensions examined were water, sanitation, housing, health and nutrition. For children 5-17, the dimensions considered were water, sanitation, housing, information and education.

Nutrition deprivation is prevalent in all countries studied

Findings show that nutrition deprivation is a serious issue in the countries studied, contributing significantly to child poverty. Figure 1 below shows that on average in the 11 countries studied, 26.7 per cent of children suffers acute deprivation in nutrition. This means that either Infant and Young Child Feeding (IYCF) standards are not met for these children, or children have a low weight for height and are thus wasted. There is not a lot of variation between the three country clusters, with Cluster 3 showing only a slightly higher acute deprivation rate of 31.7 per cent. Moderate deprivation in the nutrition dimension looks additionally at stunting and obesity. In the 11 countries, 42.7 per cent of children are moderately deprived in the nutrition dimension. Again, differences between the clusters are not very pronounced, with the incidence of moderate deprivation in the nutrition dimension ranging from 38.8 per cent in Cluster 1 to 54.1 per cent in Cluster 3. What is also remarkable is that the analysis shows very little inequality within countries. Relative gaps by geographical location of the household, household wealth and education of the head of household are very small in the 11-country average and in Clusters 1 and 2. Only in Cluster 3, which contains the countries with higher overall levels of child poverty, some profiling can be seen. In Cluster 3 countries, children from households with lower wealth status and rural children show higher levels of nutrition deprivation, but even here the differences are relatively small, with relative gaps not exceeding 1.5.

The explanation for the significant levels of nutrition deprivation observed in the eleven countries and their limited profiling by background variables lies in poor compliance with IYCF standards. These standards prescribe exclusive breastfeeding for the first six months and continued breastfeeding beyond six months with appropriate complementary feeding. It appears from the evidence presented that compliance with these standards is problematic for a significant number of children in the region, with little variation between and within countries. 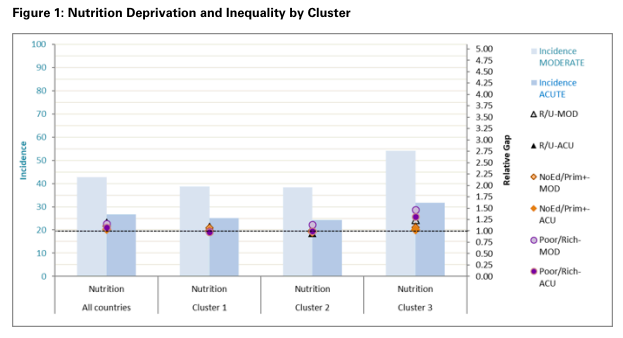 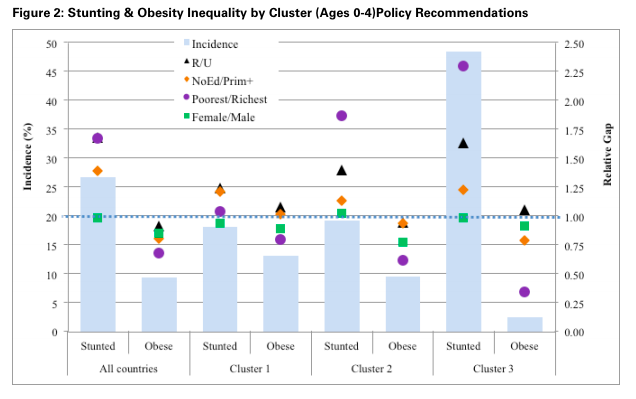