Report: India Lifted 271 Million People Out Of Poverty In A Decade

The United Nations Development Programme has released its 2019 Multidimensional Poverty Index which highlights the number of people around the world experiencing poverty at regional, national and subnational levels. The term "multidimensional poverty" goes a step further than simply focusing on a lack of finances. It encompasses other factors such as poor health or malnutrition, lack of clean water or electricity, poor quality of work and limited education access in order to provide a broader picture of poverty's true reality. The index found that across 101 countries, 1.3 billion - 23% - are multidimensionally poor with half that number aged under 18.

Despite those grim figures, some countries are successfully tackling multidimensional poverty and India is the most notable example. The report found that over 640 million people across India were in multidimensional poverty in 2005/2006 and that fell steeply to slightly more than 365.55 million by 2016/2017 - an impressive reduction of 271 million. Neighboring Bangladesh also made strides in reducing its poverty numbers with a reduction of 19 million between 2004 and 2014.

In recent years, India has embarked on several ambitious programs aimed at improving living standard such as improving electricity access and extending sanitation coverage. According to the World Bank, 70% of the population had electricity access in 2007 and that increased to 93% by 2017. Before Prime Minister Narendra Modi came to power, just under 40% of the Indian population had access to a household toilet. He vowed to change that and billions of dollars were invested in improving sanitation under the Swachh Bharat Abhiyan ("Clean India") campaign which started in October 2014. Today, India's Ministry of Drinking Water and Sanitation states that basic sanitation coverage across the country has increased to 99.45% as of July 2019. 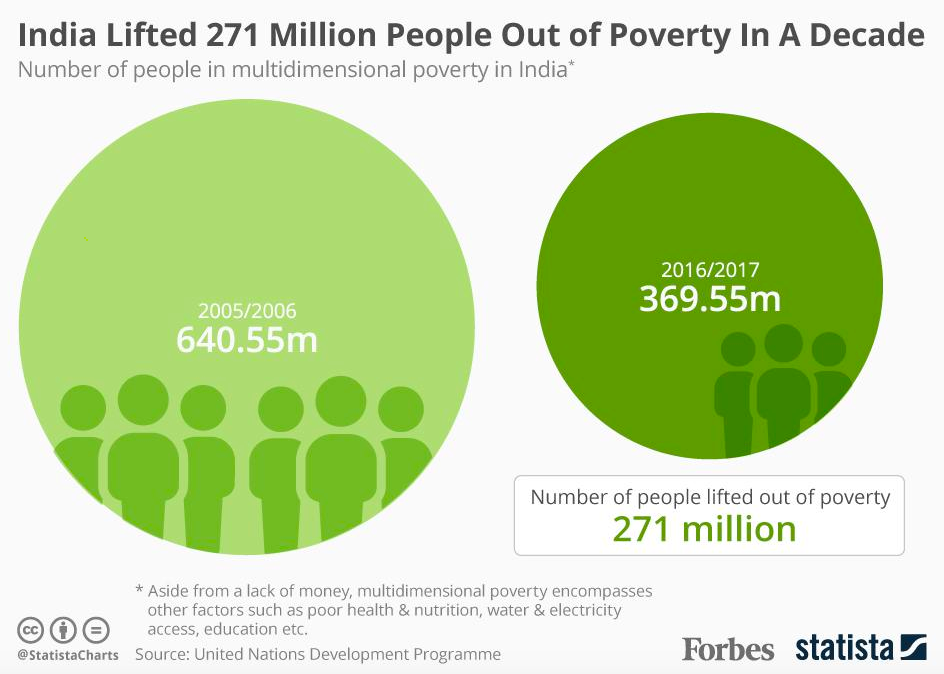 For teenage girls, having access to period products is essential. Without them, they can miss school, be embarrassed and humiliated, and even get health problems. Unfortunately, many girls around the world face what is known as "period poverty." This means they cannot afford to buy period products...
Contributor:
Olivia Miller
48 Likes
0 Comments