For some kids, staying home from school is more dangerous than COVID-19

Kids with addicted parents face a challenging future. We will experience the effects of a generation left behind at school for years to come.

As fall creeps in, this is the time of year when students usually crowd into school hallways and classrooms. It’s a chance for kids to show off their first-day-of-school outfit. An annual opportunity for personal reinvention and reconnection with classmates and faculty. Undoubtedly, the impact — good and bad — of a child’s school experience is one that will significantly influence the trajectory of their lives.

For some kids, going back to school is less about showing off a newly curated fashion sense, and more about finding a scrap of consistency in their young lives, like the consistency of two meals per day and always having a safe place to learn, free of trauma or neglect.

One of the benefits of writing this column is that it’s created opportunities for me to speak at schools and be involved in their addiction education programs. I try to have a two-sided conversation with kids on the reasons why I used drugs — with less focus on simply villainizing the drugs themselves.

We talk about things like healthy and unhealthy ways to deal with our emotions, drawing from my own experiences growing up with a father who misused drugs and alcohol. I share the lessons that would have helped me at their age.

My favorite part of speaking is answering questions from the audience. This is especially true when the audience is children. Nothing is off-limits and most school-age kids haven’t yet developed that social filter that keeps them from asking the uncomfortable questions.

Three years ago I was speaking in the auditorium of a Maine school filled with middle school students. After stepping down from the stage, I stood off to the side as the faculty started herding the kids, preparing to load them onto their buses.

A young boy approached me. If I had to guess, I would say he was around ten years old.

“My parents go to the methadone clinic,” he said, “They have been staying out late again and I’m worried about them. I’m afraid they are going to overdose and die.”

I was surprised by how he so clearly understood not only that his parents have a substance use issue and were seeking treatment, but that he also recognized a troubling re-occurrence in their behavior patterns. We spoke privately for a few minutes until he was ushered away back to class with his peers.

His teachers were apologetic after he left, unintentionally showing a negative bias based on their own experience with him. He was labeled a troubled kid. I understood. I too was labeled as a troubled kid. A vice-principal once told my mother that I wouldn’t amount to anything in life. I still think about that often.

Imagine being a young boy and having to check on your parents to make sure they are still alive before getting onto the school bus. Imagine having to contemplate the question: Are they nodding off or have they actually stopped breathing this time?

Or imagine sitting on your couch as a child — trying to do your math homework — while the cushion next to you is occupied by a rotation of familiar strangers buying drugs from your parents. Maybe your mom and dad are screaming at each other while you watch TV, sitting next to a dealer visiting from out-of-state. Maybe your parents let him use your home in exchange for some free drugs. Maybe he can help you with your math homework.

During my years of daily drug use, I crossed paths with children of dealers or other users that I associated with. There were times where I was the one anxiously seated on a couch beside a child while their parents disappeared into a back bedroom to weigh out my heroin. There were also times where I watched people injecting themselves within view of their children. On both accounts, the kids notice, and they will be affected by those moments for the rest of their lives.

Children of parents who misuse substances show increased risk for emotional, behavioral, and social issues. Perhaps the most obvious trait shown by children of substance-using parents is that they follow the same path. By young adulthood, 53% of these children show evidence of an alcohol or drug use disorder as compared to 25% of their peers, according to this study.

My father had a substance use disorder, and later in life, so did I. Substance misuse by a parent is considered an adverse childhood experience, or ACE. The term ACE was coined as the result of a study first conducted from 1995 to 1997.

A pyramid graphic represents how adverse childhood experiences later affect a child’s life. It looks at how an individual is affected not just at the time of the experience, but throughout their entire lives. ACEs occur at the beginning of a child’s life and set the foundation for life-long risks, poor decisions, and behaviors. 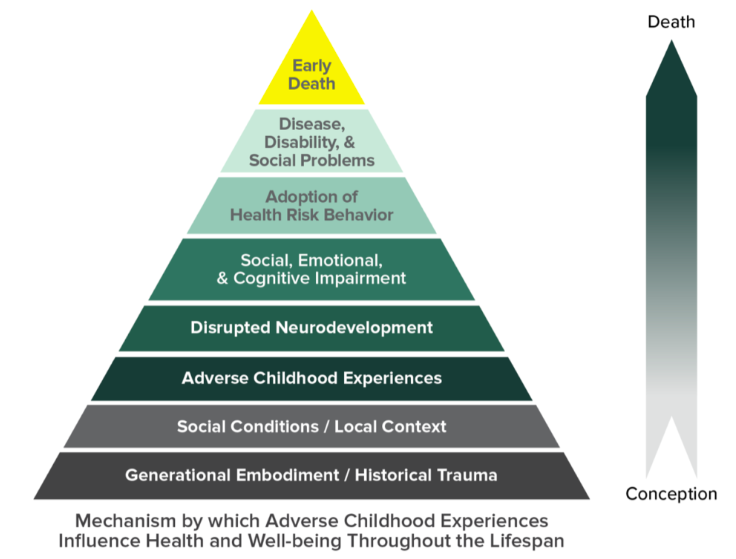 What’s so important to understand is that trauma experienced as a child sparks a butterfly effect that follows the individual until death — or in some cases is the cause of death. The consequences of our childhood trauma compound as we age.

Would my father have died an early death from alcoholism if he had not experienced the adverse childhood experiences that he did? Drinking himself to death was the outcome, but was it really the cause? For him, maybe it was the solution — the tip of the pyramid.

To give you some perspective, my ACE score is 6. You can find out your own score right here.

My intention with this column is not to downplay the severity of COVID-19 or pretend to be a medical professional, but I think it would be irresponsible to not address some of the statistics. The CDC reports that, in total, 121 people under the age of 21 have died from COVID-19. Among children and adolescents aged 5 to 17, that number drops to 58 deaths. However, 18 states have not reported a single death for a person under 20 years old, according to a joint report from the American Academy of Pediatrics and the Children’s Hospital Association.

Other causes of death for children and adolescents dwarf the current mortality rates of COVID-19 for the same group but making a direct comparison of those figures is narrow and not my point.

Young people appear largely unaffected by COVID-19 directly, but their ability to create more harm outside their age group is a cause for real concern. What makes COVID-19 deaths different from car accidents or homicides, is that a contagious individual doesn’t suffer from the effects of others who may contract the disease from them. A child’s ability to spread the virus is more dangerous than contracting it.

Likewise, the mortality rate of children who experience trauma at home can’t be accurately measured, because it’s not immediate. The consequences of leaving this generation of children behind in our school system will reveal itself long into the future if we can’t find a solution to bring all children back into school. It will appear in the form of adults who are substantially more likely to die an early death, perpetrate domestic violence, inject drugs or commit suicide.

Repurposing the UNICEF Evaluation Function during the COVID-19 pandemic

The real-time assessment (RTA) of the UNICEF response to COVID-19 at the country level is a good illustration of how the UNICEF evaluation function sought to work differently during the COVID-19 pandemic. The RTA process was rolled out in 41 countries and 7 regions between October 2020 and April...
Contributor:
clebowitz
5 Likes
0 Comments
Play Icon
COVID-19+3 more topics

Repurposing the UNICEF Evaluation Function during the COVID-19 pandemic…

Over the course of the COVID-19 pandemic, the UNICEF evaluation function repurposed its approach to ensure its continued relevance and utility. Check out this vlog that provides a brief overview of what this entailed! ...
Contributor:
clebowitz
4 Likes
0 Comments
COVID-19

The UNICEF Evaluation function dedicated a Week in October to the dissemination of new evidence that have been generated over the past 17 months related to COVID-19. Explore the COVID-19 Learning Week in Evaluation here.
Contributor:
clebowitz
3 Likes
0 Comments