The State of the World’s Children 2019

At least one in three children is not getting the nutrition they need to grow well, particularly in the crucial first 1,000 days – from conception to the child's second birthday – and often beyond. An increasing number of children and young people are surviving, but far too few are thriving because of malnutrition. To meet the challenges of the 21st century, we need to recognize the impact of forces like urbanization and globalization on nutrition, and focus increasingly on using local and global food systems to improve the diets of children, young people and women. 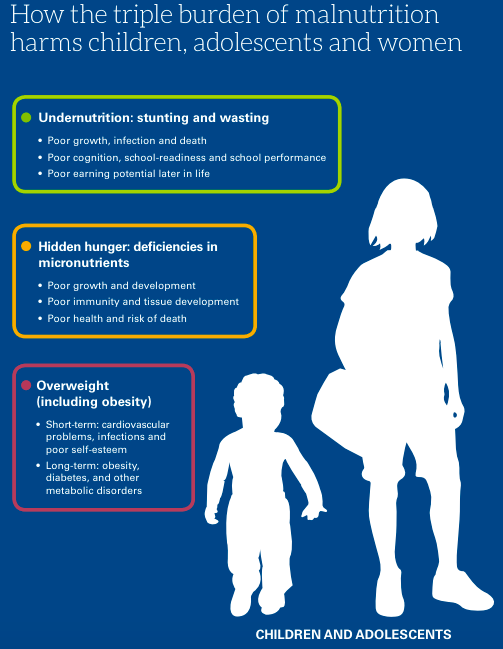 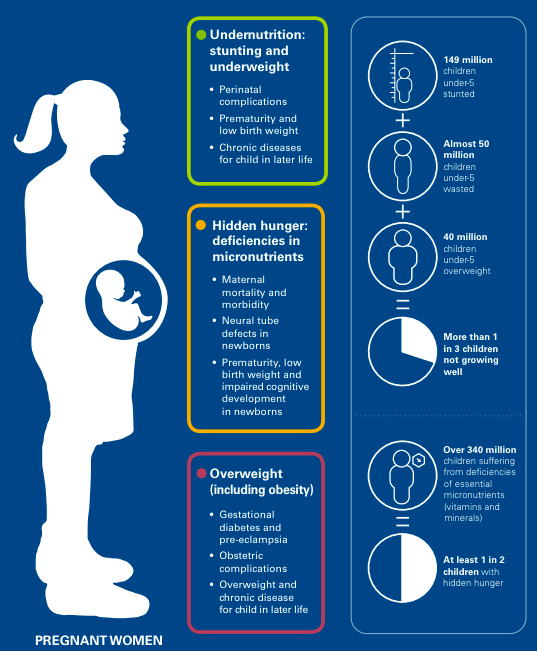 It is 20 years since The State of the World’s Children report last examined children’s nutrition. In that time, much has changed.

We have changed where we live: more and more families have left the farm and the countryside behind and have moved to cities, a global shift that will only grow in the years to come.

We have changed our roles. In societies around the world, women are increasingly joining the formal workforce, balancing work responsibilities with their role as primary caregivers, and often with little support from families, employers or society at large.

The conditions of life on our planet have changed. The crisis of climate change, the loss of biodiversity, and the damage done to water, air and soil, now raise concerns over whether we can feed this generation of children sustainably, never mind the generations to come.

Finally, we have changed what we eat. We are leaving behind traditional and indigenous diets and embracing modern diets that are frequently high in sugars and fats, low in essential nutrients and fibre, and often highly processed.

This is the backdrop to children’s malnutrition today. As with so much else, it, too, is changing. A word once inextricably linked in the public’s mind with images of hunger and famine, malnutrition must now be used to describe a much broader swathe of children – children with stunting and wasting, but also those suffering from the hidden hunger of deficiencies in essential vitamins and minerals, as well as the growing numbers of children and young people who are overweight or obese. These are the children who are not growing well.

Their numbers are worryingly high. Globally, at least one in three children under the age of 5 is stunted, wasted or overweight and, in some cases, suffers from a combination of two of these forms of malnutrition. Further, at least one in two children suffers from hidden hunger due to deficiencies – often not visible – in vitamins and essential nutrients, which can harm survival, growth and development at every stage of life.

Abstract: Within a framework of Communication for Development in Peacebuilding, this article sheds light on the use of art forms such as puppetry and photography as communication channels among youth affected by conflict and displacement. The study presented here evaluates UNICEF Art for Development...
Contributor:
ValentinaB
39 Likes
0 Comments
Adolescents+2 more topics

📣 Calling all #youth in the #AsiaPacific Region and beyond! Our friends at Youth Co:Lab are hosting the hybrid #YouthCoLab Summit 2022 this summer July 4-7, 2022 🤩 This year's Summit aims to highlight, encourage and celebrate the role of young people in the #DecadeofAction, while showcasing and...
Contributor:
clebowitz
42 Likes
1 Comment
Adolescents

For teenage girls, having access to period products is essential. Without them, they can miss school, be embarrassed and humiliated, and even get health problems. Unfortunately, many girls around the world face what is known as "period poverty." This means they cannot afford to buy period products...
Contributor:
Olivia Miller
47 Likes
0 Comments