Where Life Begins: Reducing Risky Births in a Refugee Camp

Zaatari camp, the largest Syrian refugee camp in the world, sits less than 12 kilometers away from the border between Syria and northern Jordan. Rows of houses disappear into the desert, making it hard to tell where the camp begins and ends. Metal containers pieced together like patchwork are home to around 80,000 refugees. The remnants of tattered UNHCR tents cover holes in the walls. Almost seven years after the camp opened, this dusty sea of tin roofs has evolved into a permanent settlement.

When I entered Zaatari camp to begin my internship with the Women and Girls Comprehensive Center, I saw signs of resilience and humanity everywhere—colorful murals of smiling children, barefoot boys playing soccer, a wedding dress shop. Perhaps the greatest proof that life goes on can be found in the camp’s maternity wards, which see an average of 80 births per week, along with 14,000 consultations per week for expecting mothers. About 1 in 4 of the Syrian refugees living in Zaatari are women of reproductive age. According to UNFPA, 2,300 women and girls in Zaatari are pregnant at any one time. The extremely high fertility rate demonstrates how vital it is to facilitate access to quality reproductive and maternal health services during complex emergencies.

At the Women and Girls Comprehensive Center in Zaatari camp, which is run by the Jordan Health Aid Society and supported by UNFPA, refugee women of all ages receive services such as family planning, pre- and post-natal care, vaccinations, gynecological check-ups, and culturally sensitive information sessions. Every day, the clinic delivers five to seven babies. As of September 27, 2018, the clinic has had 10,089 safe deliveries and zero maternal mortalities, a stunning achievement that remains posted on a scoreboard outside the clinic’s gates.

Despite this success, giving birth in Zaatari is not without dangers. The high prevalence of non-communicable diseases (such as anemia, diabetes, and hypertension) among Syrian refugees—and especially the inadequate management of these chronic conditions when they are fleeing conflict—increase health risks during and after pregnancy. Domestic and gender-based violence, which spike during complex emergencies, also cause extreme harm to women and girls.

One of the greatest challenges facing the Women and Girls Comprehensive Center involves caring for pregnant adolescent girls and young women under 20 years old. Due to instability, displacement, and poverty, the rate of child marriage among Syrian refugees  is more than four times what it was in pre-crisis Syria. For Syrian refugees in Jordan specifically, the rate has doubled in the last four years. Consequently, many of these girls have multiple children before they even reach adulthood.

Seeing girls 16 years old and younger, in pain and alone in the delivery room, was one of the most difficult experiences of my time in Zaatari. As adolescents, they are much more likely to experience risky pregnancies, as well as premature birth and children with low birth weight, than women over the age of 20. Most of these girls are not aware of the risks of early marriage and pregnancy, and often do not feel safe during delivery.

At the center, refugees can access various forms of family planning, including birth control pills or IUDs. The midwives and doctors also host informational sessions on reproductive health topics, such as healthy prenatal behaviors and the risks of child marriage. The center’s oldest midwife, who everyone fondly refers to as “Mama,” makes home visits around the camp to discuss family planning and women’s health with families.

Despite the clinic’s efforts to encourage postponing and spacing pregnancies, the family planning services offered are not always used. Some women and girls are pressured by their husbands and families to avoid contraceptives and continue producing children without adequate time for recovery in between births. One patient I met at the clinic was famous in Zaatari, the midwife told me in a hushed voice, for having 12 children, all by cesarean section, over the course of 12 years. Women and girls who had IUDs placed often came back soon after to get them removed, per their husbands’ demands. Many Syrians feel obligated to have a lot of children to compensate for the family and friends killed in the war or to increase the likelihood that their children will survive.

To save lives, we need to not only offer reproductive health services, but ensure they are culturally sensitive as well. Unlike other host countries, Jordan does not face large language or cultural barriers when providing care to Syrian refugees. Jordanians and Syrians speak similar Arabic and come from predominantly Muslim societies with shared values. This is an advantage for healthcare providers in Zaatari because they already have a good understanding of their patient population, which facilitates patient-provider trust and overall better quality care.

For example, when treating a woman who insisted on fasting for the religious holiday of Ramadan while pregnant, the Jordanian midwives were the best people for the job. As Muslim women themselves, they had a deep understanding of the woman’s motivations and could explain the serious health consequences of her decisions while still respecting the significance of the religious practice. By practicing empathy and non-judgment, they were able to help this woman find a balance between health and faith without alienating the patient and discouraging her from seeking care in the future.

Early in my internship, we transported a woman in premature labor to a bigger hospital in Mafraq, the next closest city. As we all tried to maintain our balance in the back of the bumpy ambulance, the baby’s head began crowning. We pulled over to the side of the road and safely delivered her baby right there.

This is where life begins in Zaatari: in the back of dusty ambulances with missing windows, in delivery rooms with flies buzzing, in clinics where Jordanians and Syrians work together to protect women and children. Despite the enormous challenges facing these refugees and the healthcare workers seeking to help them, every day is the first day for another new life. 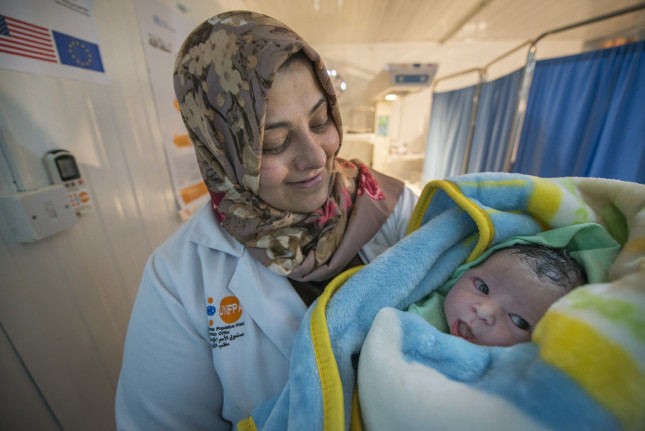 The author of this blog, Elizabeth Wang, details her experience as an intern with the Women and Girls Comprehensive Center, run by the Jordan Health Aid Society, in the Amman and Zaatari camps. She details the challenges faced by pregnant women there, including risky pregnancies and dangerous deliveries, as well as the successes won from cultural sensitivity.

For teenage girls, having access to period products is essential. Without them, they can miss school, be embarrassed and humiliated, and even get health problems. Unfortunately, many girls around the world face what is known as "period poverty." This means they cannot afford to buy period products...
Contributor:
Olivia Miller
48 Likes
0 Comments