Youth employment in the Middle East and North Africa: Revisiting and reframing the challenge

In the early 2000s, youth in the Middle East and North Africa (MENA) region became a focus of intense research and policy discussion. At the time, the region had the highest youth population shares in the world, as well as the highest rates of youth unemployment.[1, 2] These two factors generated a sense of urgency among policymakers regarding the need to create enough jobs to absorb the incoming flux of young workers.[3] However, despite concerted policy efforts, by 2010, the region had failed to improve employment outcomes for its youthful population. Youth frustration grew over their social, economic, and political exclusion, exploding in 2011 into protests across the region.

Today, MENA countries have reduced their focus on youth employment, prioritizing security concerns over political and economic reforms. Although the demographic “youth bulge” that underpinned the call to action a decade ago persists and the window of opportunity it created remains open,[4] the crest of the demographic wave has passed in most MENA countries. International attention has shifted to Sub-Saharan Africa as the region with the largest population share of youth. Indeed, the policy response to the 2016 Arab Human Development Report, which focused on youth, was remarkably weak.[5] Yet, the challenges facing MENA youth today are as stark as ever, exacerbated by low rates of economic growth, curtailed political freedoms, and diminished opportunities for migration.[6] There is an urgent need to assess past policy failures and to reenergize efforts to address the youth employment challenge.

Youth unemployment rates in the MENA region have been the highest in the world for over 25 years,[8] reaching 30 percent in 2017 (Figure 1).[9, 10, 11] Moreover, MENA youth often search for years before finding work.[12] This delayed transition to work affects other pathways to adulthood, including marriage, homeownership, and civic participation. This delay in transition to adulthood has been termed “waithood,” a term reflecting the waste of youthful energy and potential.[13] Over the past decade, youth unemployment in the MENA region has been elevated by a series of crises, including the 2008 financial crisis, 2011 uprisings, armed conflict, and the 2014 fall in oil prices, which affected remittances and migration to the Gulf. However, structural factors continue to be the main reason behind the region’s high youth unemployment rates.

Even though there are substantial differences in political, social, and economic conditions across MENA countries, youth unemployment is a challenge across the region. This motivates our undertaking of a regional overview that highlights shared trends and features, while also considering country-level variations. Indeed, in all MENA countries with available data, youth unemployment rates are higher than the world average of 13 percent (Figure 2).[14, 15] The highest rates are in countries as diverse as Palestine (43 percent), Saudi Arabia (42 percent among nationals), Jordan (36 percent), and Tunisia (36 percent). Only in Qatar are youth unemployment rates lower than the world average, due to its capacity to absorb young nationals into public sector jobs. 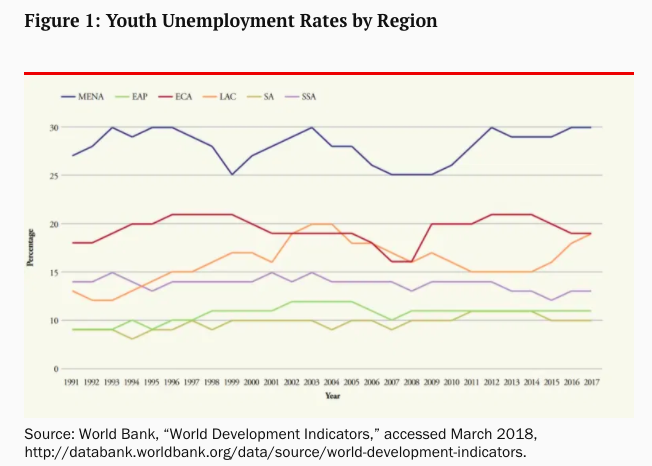 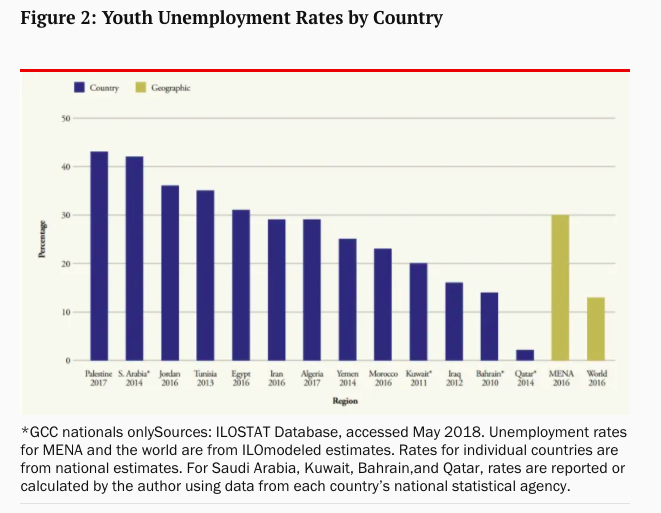 Much research has gone into studying the factors behind the phenomenon of high youth unemployment and waithood in the MENA region.[18] On the supply side, researchers have identified a number of factors, including: a demographic wave that increased labor supply pressures across the region in the early 1990s and 2000s;[19] weak educational systems that did not adequately prepare youth for the world of work;[20] a lack of labor market information systems and career planning resources for job seekers;[21] and a mismatch between the expectations of educated job seekers and the wages and prestige of available jobs.[22] Young women in the region faced an additional set of factors that contributed to their economic exclusion, including discrimination and conservative social norms.[23] 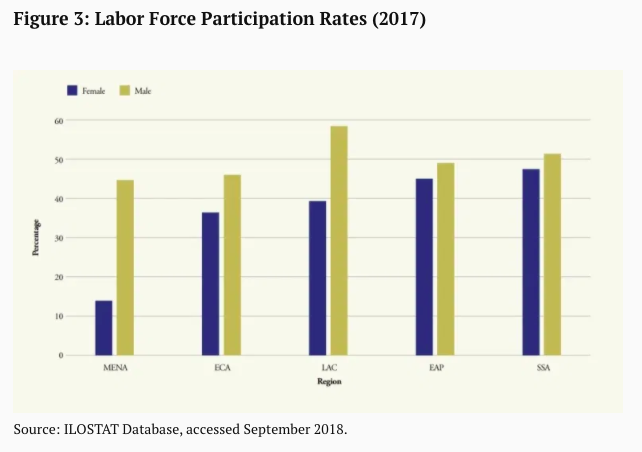 On the demand side, relatively high wages, benefits, and job security in the public sector have continued to attract young people and encourage job queuing for increasingly scarce positions.[24] Meanwhile, over-regulation of the formal private sector has hampered its ability to create decent jobs [25] and inflexible labor laws [26] have supported existing workers at the expense of new entrants and stifled job creation.[27] Finally, large-scale cronyism has created inefficient large companies that do not need to worry about hiring the best workers to remain profitable.[28] In 2018, the average rank of Arab countries on the World Bank’s Doing Business Survey was a woeful 115 out of 190 economies.[29] The inability of MENA economies to create enough decent employment opportunities is arguably the most important factor behind the high rates of youth unemployment and joblessness in the region.

The limited number of opportunities in the formal sector has led to the expansion of informal sector jobs, which generally offer fewer benefits or protections. Furthermore, firms that operate in the informal sector are less able to grow and create new jobs, as this would place pressure on them to formalize. Youth employment rates in the informal sector are as high as 80 percent in Palestine, Egypt, and Tunisia.[30] Faced with a lack of decent job opportunities, some youth turn to entrepreneurship and self-employment. Yet, at 9.3 percent, the average share of MENA youth engaged in early stage entrepreneurial activity in countries with available data is lower than the world average.[31] One major barrier for youth entrepreneurs is a lack of access to finance. The average rank of Arab countries in terms of access to credit was 130 out of 190 economies; youth, especially, have limited credit histories and collateral.[32]

In the absence of decent employment opportunities, many youth in the MENA region have chosen to leave their communities in search of work. This is particularly evident in rural areas, where youth are leaving to cities in search of better opportunities. However, rural-urban migration has not resolved the issue; youth unemployment rates are actually higher in urban areas in all MENA countries with available data.[33] Large numbers of youth are also leaving the region altogether. Between 2000 and 2015, net migration from MENA countries (excluding Gulf countries) was estimated to be 8.4 million, among the highest population shares in the world.[34] Migration within the region is also high, mainly involving young people from labor-abundant countries seeking economic opportunities in the Gulf or refugee populations fleeing conflict.

Two decades ago, researchers and policymakers began to focus intensely on youth in the MENA region.  In 2004, a World Bank report estimated that MENA economies would have to create 97 million jobs from 2000 to 2020 in order to address the employment needs of their rapidly growing populations.[35] The 2007 World Development Report, Development and the Next Generation, argued that investments in youth contribute to economic growth.[36] Nowhere was this more salient than in the MENA region, which had the highest youth population share and the highest youth unemployment rates in the world.

Upon leaving his position as president of the World Bank, James Wolfensohn founded the Wolfensohn Center for Development at the Brookings Institution, which prioritized research on youth in the MENA region.[37] In 2007, the Wolfensohn Center and the Dubai School of Government jointly established the Middle East Youth Initiative (MEYI), which produced a substantial body of original research on youth social-economic exclusion.[38] MEYI’s work ended in 2011, just as the Arab uprisings were unfolding. Indeed, one issue that MEYI failed to tackle meaningfully was the issue of youth political exclusion.

One of the challenges facing researchers at the time of the World Bank 2004 flagship report was that there was little data or analysis on MENA youth.[39] Over the following decade, a substantial amount of data on youth was collected. In 2005, the International Labor Organization (ILO) conducted school-to-work transition surveys in Egypt, Iran, and Syria. The ILO followed this in 2012 with a second round of surveys in Egypt, Jordan, Lebanon, Palestine, and Tunisia.[40] National youth surveys were undertaken in Iraq (2009),[41] Morocco (2009),[42] and Tunisia (2012).[43] The region’s first longitudinal survey of youth was conducted in Egypt (2009-2014).[44] Even the private sector got involved: Communications agency ASDA’A Burson-Marsteller has conducted an Arab youth opinion survey annually since 2008.[45]

The international community has also responded to the issue of youth employment in the MENA region. The World Bank and the ILO launched several initiatives, including the Global Partnership for Youth Employment, which ran from 2008 until 2014 in partnership with the International Youth Foundation and the Arab Urban Development Institute, and focused mainly on the Middle East and Africa. In 2009, the Youth Employment Network, another initiative by the World Bank and the ILO, launched the Taqeem Initiative to help build program evaluation capacity in the region.[46] In 2009, UNICEF and the American University of Beirut collaborated on the “Youth in the Arab World” initiative.[47]

MENA governments also focused heavily on youth issues between 2000 and 2015. Several developed national youth strategies that covered multiple dimensions of youth policy, including migration, health, education, employment, culture, and civic and political participation (Table 1). National youth strategies are currently active in Lebanon (2012), Morocco (2003), and Yemen (2006). They were previously adopted in Djibouti (2001-2005), Jordan (2005-2009), and Palestine (2011-2013), and were in development, but not formally adopted, in Bahrain, Egypt, Iraq, Kuwait, Sudan, Saudi Arabia, and Syria.[48] Only Yemen adopted a National Action Plan that focused specifically on youth employment.[49]

Abstract: Within a framework of Communication for Development in Peacebuilding, this article sheds light on the use of art forms such as puppetry and photography as communication channels among youth affected by conflict and displacement. The study presented here evaluates UNICEF Art for Development...
Contributor:
ValentinaB
24 Likes
0 Comments
Adolescents+2 more topics

📣 Calling all #youth in the #AsiaPacific Region and beyond! Our friends at Youth Co:Lab are hosting the hybrid #YouthCoLab Summit 2022 this summer July 4-7, 2022 🤩 This year's Summit aims to highlight, encourage and celebrate the role of young people in the #DecadeofAction, while showcasing and...
Contributor:
clebowitz
23 Likes
0 Comments
Adolescents

For teenage girls, having access to period products is essential. Without them, they can miss school, be embarrassed and humiliated, and even get health problems. Unfortunately, many girls around the world face what is known as "period poverty." This means they cannot afford to buy period products...
Contributor:
Olivia Miller
27 Likes
0 Comments